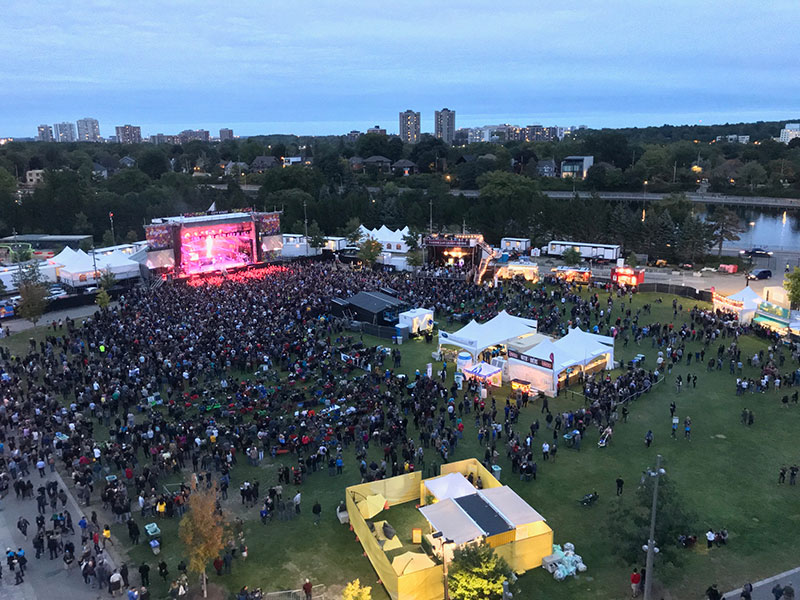 City Folk is a multi-day celebration of music, dance, and community featuring an eclectic mix of musical performances on various stages. Held on The Great Lawn at Landsdowne Park, the event is scheduled to take place this year between 12-15 September, (COVID-19 restrictions dependent).

While its origins are in Canadian folk music, since 2011 the festival has also spotlighted other genres, including alt-country, hip-hop, roots, and blues, with recent headliners including Robert Plant, Hozier, David Byrne, Jack Johnson, Van Morrison and Lorde. In addition to musical performances, the festival features local craft beer and artisans, festival food, and an offshoot event called Marvest – free concerts featuring emerging talent, held in local businesses. Paradigm Rigging has worked on the event since 2018. Michael Sorowka, MD of Paradigm Rigging explained:

“I was brought on board by Scott Pollard, Technical Director with City Folk Festival. We’ve been working together since about 2012 on various projects. For City Folk Festival, Paradigm was brought on board to provide load monitoring on all hung points within the festival, between the Stageline main stage as well as a B Stage inside Aberdeen Pavilion (A historical exposition hall adjacent to the main stage). Wind speed monitoring was also requested on the outdoor main stage to allow continuous read outs inside the production office located directly behind the main stage.”

The two spaces Paradigm was tasked with load monitoring are drastically different, with one being a widely seen Stageline mobile stage and the other being a heritage exposition hall.

“Outdoor stages always pose a heightened  risk towards high winds, explained Michael. “The biggest challenge is that, as with any outdoor festival, there are many moving parts to coordinate, including making sure weights hung within our structures are within engineer approvals and also monitoring anticipated upcoming wind forecasts as well as real time wind speeds across site. These components all work together and impact each other, where daily forecasts might predict winds of a certain amount, more current meteorologist reports might suggest something more specific. We need a system in place on site that actually verifies the real time winds coming in which may be above what we may have been anticipating so that we can act accordingly on that information. “

Each outdoor site has its unique variables, which often factor into different wind patterns, so a modular wind speed system reporting back to a centralised monitoring area is an essential tool to give the clearest picture on what speeds are actually being seen across site, as well as comparing readings with anticipated winds from third party weather services. The Broadweigh Wind Speed System, plays a key role with all of this. Paired with its industry leading wireless load shackles, together they shed great transparency on two of the largest areas of potential concern with outdoor structures. The kit’s value really shows – both on the ease of setup as well as flexibility on configuration and overall modular scalability.

Mike added: “With new additions to the Broadweigh line, including Sensorspace cloud platform which we have been running really beta trials with, the data is not only continuously saved to the cloud but also accessible to anybody with a shared URL which is a huge advantage to festival organisers and technical departments alike.”

With Broadweigh’s Bluetooth and Wind Speed Sensors in action, the team on CityFolk had peace of mind that they could always stay one step ahead of the weather. Michael recalls:

“The team on CityFolk is made up of the same guys I work with on the Ottawa Bluesfest where we’ve been using Broadweigh kit for years. Last year during Bluesfest, a storm blew through the site. With ample warning from our meteorologist partners, we knew days before we were in for some adverse weather coming into that day. In the morning, stage managers were updated about the day’s anticipated storms, as well as artist hospitality to keep all touring acts informed, not only about the storms, but also to give a rundown of our severe weather action plan, and what to expect when certain steps are triggered– items such as high winds or lightning within a safety radius.

Having these plans well documented, as well as familiarized with stage managers, artist management as well as production crew leads, is nearly as important as the plan itself, so that everyone knows how directions are going to be relayed, as well as what to do at each step of the plan.

We were monitoring the storm’s trajectory both through our weather services as well as data available onsite, using the BW-WSS wireless anemometer mounted on the top corner of the stage to keep aware of current wind speeds, and if we needed to, we could make any evacuation notices sooner than anticipated.

The proximity of lightning ended up being the main trigger for evacuating the stage– not wind speed on this one instance, however speeds were monitored as the storm passed over to paint a clearer picture of what, if any, damage could have occurred from high winds. It’s not always that wind speed is the trigger for a specific safety plan, however it’s the one tool we want in our toolkit when wind speed can be that determining factor and is an absolute must for anyone working the festival circuit.”