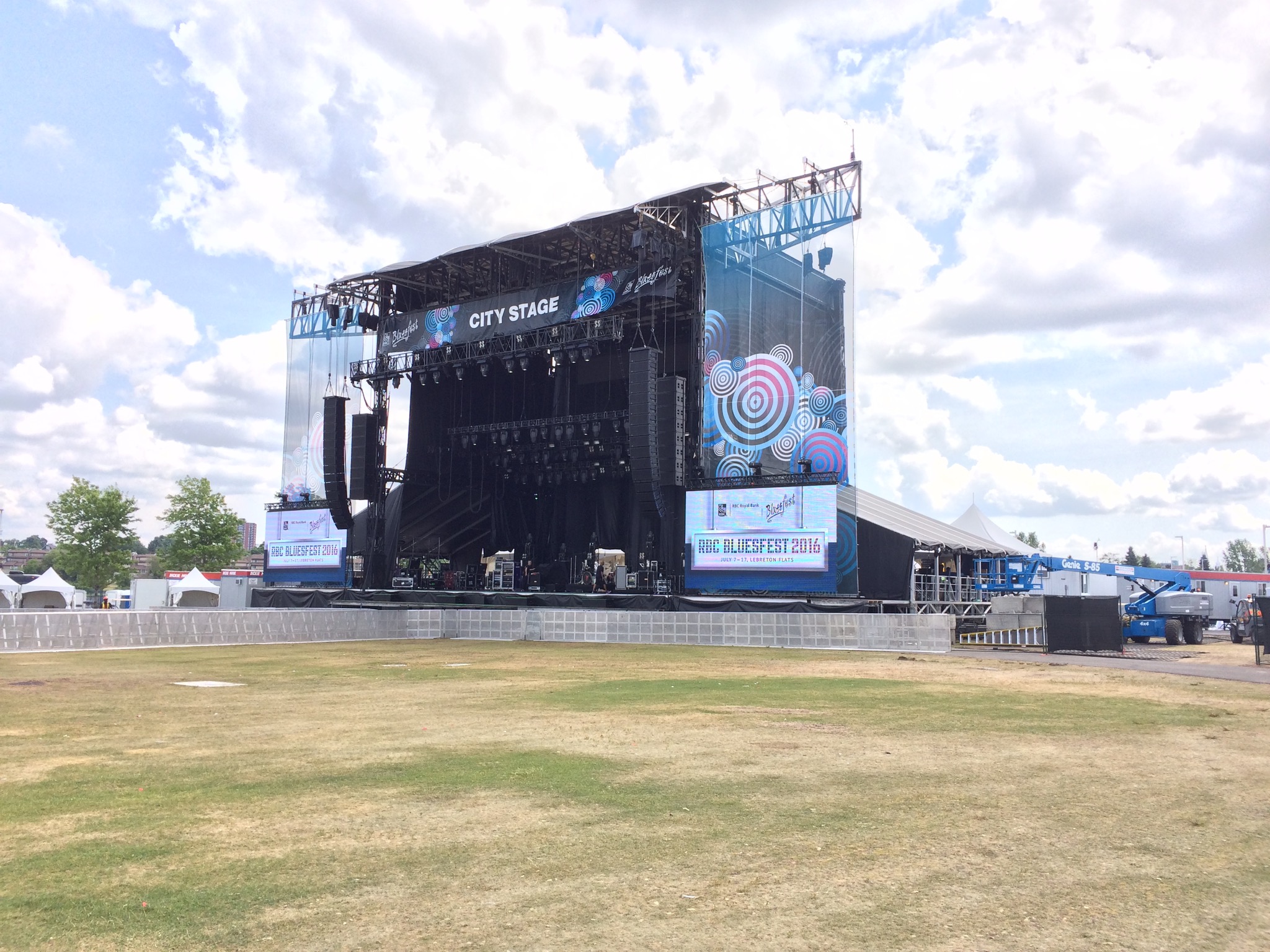 The Ottawa Bluesfest is a world class event that showcases local, regional, national and international musicians and since its inception in 1994, it has become one of Canada’s foremost music festivals. Bluesfest was originally established to support and sustain the growth of emerging and diverse musical genres including the Blues, World Music, Alternative, Rock, Jazz, Funk, Soul, Rap, Folk, Urban and other forms of music that develop from time to time and through its remit it has grown to become one of the top ten music festivals in the world according to Billboard Magazine.

As a multi day festival which can run from 9-12 days depending on the touring schedules of the artists, the festival’s organisers faced the challenge of constantly changing the LX and video rigs as well as moving trusses and audio clusters. This year, with one indoor stage and four outdoor stages, the wind conditions could have had a dramatic impact on the festival.

Greg Myers, Lead Audio Systems tech at Wall Sound explained: “The weather can change and when wind speeds and directions come into play, it is vital we have a good understanding of the loads on each point and overall weight is very useful especially if we are near capacity of a motor, point or over all.” Scott Pollard, Technical Director of Bluesfest added: “We wanted to implement the use of load cells to assist us in ensuring we were well within the limits of all of the equipment we were using; stage, trusses, motors etc… For an outdoor festival it is invaluable to be able to monitor the loads as equipment moves  as well as changes that may be caused by environmental factors.”

Having worked with Broadweigh’s Canadian partner, Paradigm Rigging during the 2015 festival, Scott contacted Managing Director, Michael Sorowka who recommended the Broadweigh wireless system as the perfect solution for such a demanding project.

Paradigm Rigging has a reputation for handling the load cell monitoring at large  scale events with ease and Ottawa Bluesfest was no different. Michael explained:

“Once Scott had run through the exact requirements, we were able to specify 20 cells and logging kit with laptop, BW-BSue and LOG100. The recent Broadweigh system upgrade which sees the signal boosted to an 800m range proved extremely advantageous in these circumstances, giving seamless readings. The 5/8″ shackles(BW-S325) were also a bonus as we were able to clip right into a one tonne motor and the 3/4″ shackle(BW-S475) can clip directly into a 2 tonne motor meaning the install takes just seconds.”

With Scott, and the rest of the team satisfied that the Broadweigh system was the right tool for the job, the system was used on lighting, video and audio house points for the festival. With video and audio going up and down at least once a day, the cells were used on the City Stage which featured acts like Billy Idol, John Fogerty, Red Hot Chili Peppers, Duran Duran, Brad Paisley and many more. At least one of each type of screen, audio cluster and most LX trusses we measured.

Greg added: “It was a big eye opener to see the drastic weight changes with just one bump on one motor on even a five or six motor lift. On the first day of the festival we were able to adjust the level on our main PA bumpers as they raised in the air in order to balance our load between its two points better. The team  was also able to notice major differences between motor weights on trusses that had multiples of them. In all cases  we were able to correct imbalances, which, had it not been for BroadWeigh, we would never have noticed otherwise.”

Scott added: “The Broadweigh system is both reliable and intuitive. Having the current as well as peak weight for all the points was invaluable. Being able to monitor what is currently happening but also being able to see what happens when you’ve not got your eye on the computer is extremely handy and reassuring. The ability to register ‘warning’ and ‘overload’ weights is also a particularly clever feature. There were several occasions when someone was moving a truss that a warning came up – we simply stopped the movement, corrected the motors and then finished the movement.”

Greg concluded: “For me as a user, I am looking for a system that not only works well but is simple and accurate. This is vital when dealing with multi day, multi stage festivals. I need to be able to count on the data I am receiving so that I can make informed decisions to artists, crews, front office and most importantly I have confidence in the safety of all concerned. Without doubt I will continue to use Broadweigh in the future.”