Mantracourt have announced that their BroadWeigh wireless load monitoring system has been chosen by technicians at Casino Rama, a major concert and event centre in Ontario, Canada. 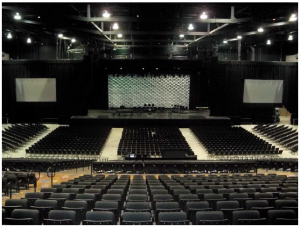 The wireless BroadWeigh™ system enables the accurate, real-time load monitoring of rigged equipment and has been designed to assist designers and rigging professionals within the entertainment sector.

“The safety of our guests, performers and staff will always be Casino Rama’s top priority,” said Derek Noble, Lead Lighting Technician at the Casino Rama Entertainment Centre. Production rigging at the facility’s 5,000 capacity concert hall is no exception to this.

Central to the design of the BroadWeigh system are wireless shackles equipped with a high accuracy load pin that reports data remotely to a computer or a handheld display. The system is able to monitor multiple load cells and can trigger an alarm should a load exceed a preset parameter. “The ease of use of the BroadWeigh system, the speed at which it can be implemented and cost/value means it is both the best and the safest option for us,” said Derek. “I would gladly recommend this system for any venue that is concerned with rigging overloads or incoming tours damaging the existing roof structures.”

Prior testing of the BroadWeigh system’s wireless data transfer was carried out at the facility to prove stability of the platform and to be sure that the BroadWeigh signal was not interfering with or being affected by other wireless signals in the building. Casino Rama Entertainment Centre relies on numerous wireless communication systems for its daily operations, as well as incoming productions devices and the possible 5,000 mobile phone users who attend the concerts.

“Initially I was concerned with interference due to the number of wireless systems already in the building but not anymore,” said Derek. “The communication was better than we expected. This system enables us to know what production is rigging in terms of both the weight and balance of the loads. The price point per shackle meant we could purchase more load cells than the other systems we considered while still achieving the desired result. ”
BroadWeigh’s North American representative, David Bond, worked together with Derek Noble and his team to address every requirement and concern prior to the purchase and also provided a training day upon delivery of their order. This instruction included both the hardware and software elements of the system.