A record number of Broadweigh load cells have been used to monitor the loads at this year’s Ottawa Blues Fest in Canada. A mix of 3.25 tonne and 4.75 tonne shackles, totalling 64, and three laptops using the new wireless dongle (BW-BSd) and extended range (BW-BSue) base station receivers have been utilised by BroadWeigh’s Canadian product partner, Paradigm Rigging to ensure the safety of the performers and the massive audiences attending the popular event.

“This is the third year we have used Broadweigh kit on the main stage, with audio handled by Wall Sound, lighting by Christie Lites and the project overseen by the event’s technical director Scott Pollard. The first year we started with a kit of 20 4.75 tonne shackles . Last year this was up to 40 units – a mix of the 3.25(BW-S325) and 4.75 (BW-S475) tonne shackles With this year being the largest use of load cells at this festival so far, which provided maximum flexibility and performance.”

“My onsite work this year began two days prior to the festival opening. When I arrived Mike and the rigging crew already had my motors and load cells hanging and tested, ready for audio to fly. This year our system remained very similar to last year. We gave Mike a sheet listing the weights each point would hang at, when the rig was in the air as well as what each hang weighed in total. The second set of numbers was very important so Mike (and the entire rigging team) would know the maximum potential load of any given point. We were using 8 wireless load cells on the PA, one dongle base station (BW-BSd) and the monitoring software (LOG100). With the use of the BW-BSd dongle this year (past years we used the larger extended range base station ,BW-BSue), the receiver and software become much more portable, making it easy for me to bring the laptop? with me, beside the PA as I raised and lowered it, allowing me to constantly monitor my loads while the rig was moving.” 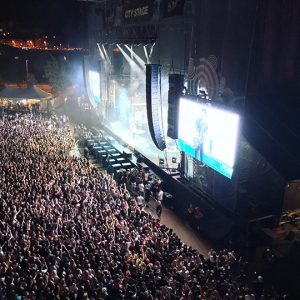 “The big addition for us this year was shuffling load cells onto the touring acts’ rigs as they came through. As the house rig was taken down in preparation for the next day’s act, we would recover the load cells from those points and reconfigure the layouts in the LOG100 logging and monitoring software to match the next day’s needs. Creating a base configuration of the load cells in the program made this process pretty easy – accounting for which cells were available, deciding their locations on the rigging plot for install the next day and then building a plot overall with these cells referenced to the appropriate source. Using the BW-S325 cells made for extremely quick installs, clipping directly into the touring shows motors with no need to open up the load cell for installation, and having the wireless performance of the kit allows our weighting to be the least invasive option possible. Using wired load cells for this application would not have been acceptable with the needs to have our own cable looms running over the touring trusses and back to our own central displays rack, and would add considerable time and frustration for the tours to work around on both load ins and load outs were speed can be paramount.”

Russell Benoit, from Christie Lites has been involved with the festival for eight years. As Lighting Crew Chief he is responsible for implementing the lighting design and planning the control system for the house lighting rig.

“This year, the load cells really proved their worthiness when it came to trimming and landing the video walls. Even when a laser level was used, there was the possibility that one or more points could be overweight. The mobile viewing software allowed us to see in real time the weights and adjust accordingly. When different acts tour through and hang their own lighting and rigging components off house trusses, the BroadWeigh wireless load cells are a handy tool to ensure the weights are matching the weights that have been approved. Knowing in real time the weights in the roof can be helpful information to pass on to an engineer, venue or staging supplier. It is an extra safety measure to ensure that what you are rigging is within the weight restrictions of the venue.”

The biggest and heaviest show of the festival was without doubt, Foo Fighters. For this show, the lighting rig stayed in place, and the tour brought in 4 primary lighting trusses, and a large upstage video diamond which hung off 3x 2ton motors. Mike knew this was going to be a fair bit of weight in the middle section of the roof, so on top of monitoring each point individually, he also used the features within the LOG100 configuration pages to allow him to have a summed value of all the cells in specific sections of the roof.

“This show brought the total Main Stage festival load cell use up to 64 load cells, tapping out what we had on site, and there were 3 lighter cable bridges which had to forgo load cells because of quantity constraints.”

Other notable shows were Bryan Adams, which had used the Broadweigh cells in their pre production rehearsals earlier in the year in Toronto. Their crew was eager to note down weights of this current configuration as it was modified from original rehearsals. Dave Matthews band also had a sizeable amount of load cell in use with multiple lighting trussed running upstage to downstage and a larger video wall on the upstage.

“We have worked with Paradigm using Broadweigh for the last few years and found the working relationship very good. The benefits and peace of mind of having the Broadweigh cells is almost invaluable especially as we increase the amount of equipment hung from the Stageline SAM750 we use. It seems to me that going without is just not a possibility with today’s ever changing weather patterns, artists’ requirements, scheduling changes and safety. Safety is paramount over everything else and with tight timing and the other factors just mentioned, utilizing a load cell package is not only prudent but imperative. I am a big supporter and promoter of Broadweigh – my day changes all the time and having the peace of mind allows me to deal with the last minutes changes without having to worry about what is happening to the roof structure, it is as simple as that.” 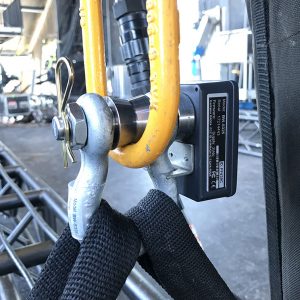 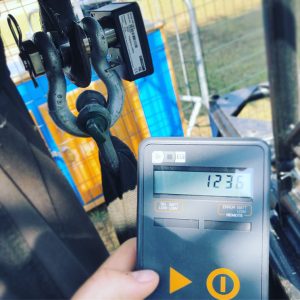 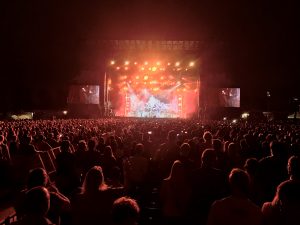 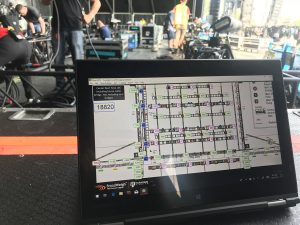 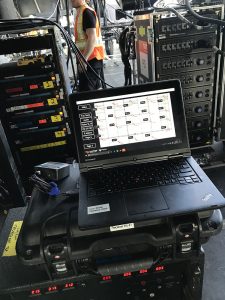