Broadweigh gets ‘Wonderful Wonderful’
results on The Killers World Tour

Load Cells used to monitor the loads on video pyramid

Paradigm Rigging has worked with Christie Lites to monitor the loads with Broadweigh wireless load cells on The Killers Wonderful Wonderful World Tour. 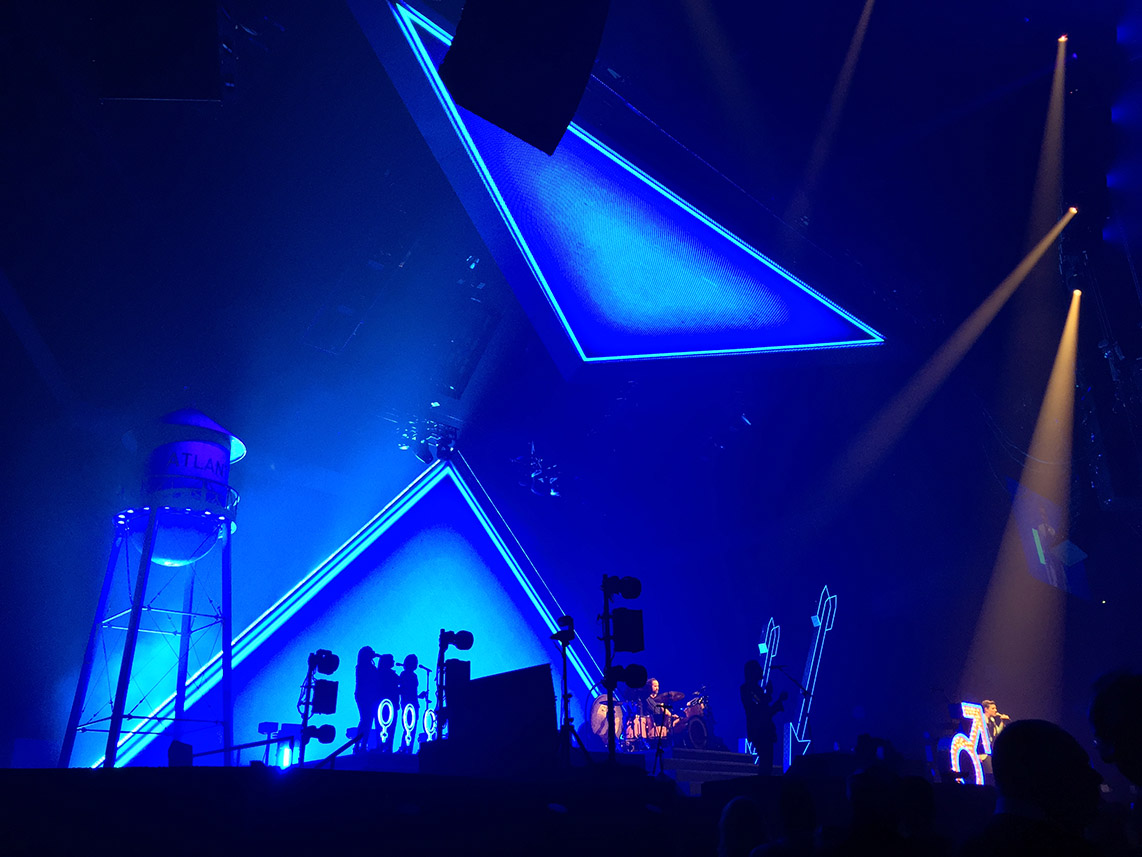 “In September we were brought to New Jersey where The Killers were doing technical rehearsals and programming of the show before their UK leg. There we had 56 cells in play to weight the full show before it hit its first arenas. From initial versions, cells were originally going to be specified for some of the larger video walls and two mother grids to help with determining load distribution, but through a few minor design revisions, elements of that changed which in turn changed the needs of the load cells for the run.”

The set gives a Las Vegas feel consisting of large flown marquee arrows lined in neon, pointing downward to the stage as well as a miniature water tower showcasing each city’s name. 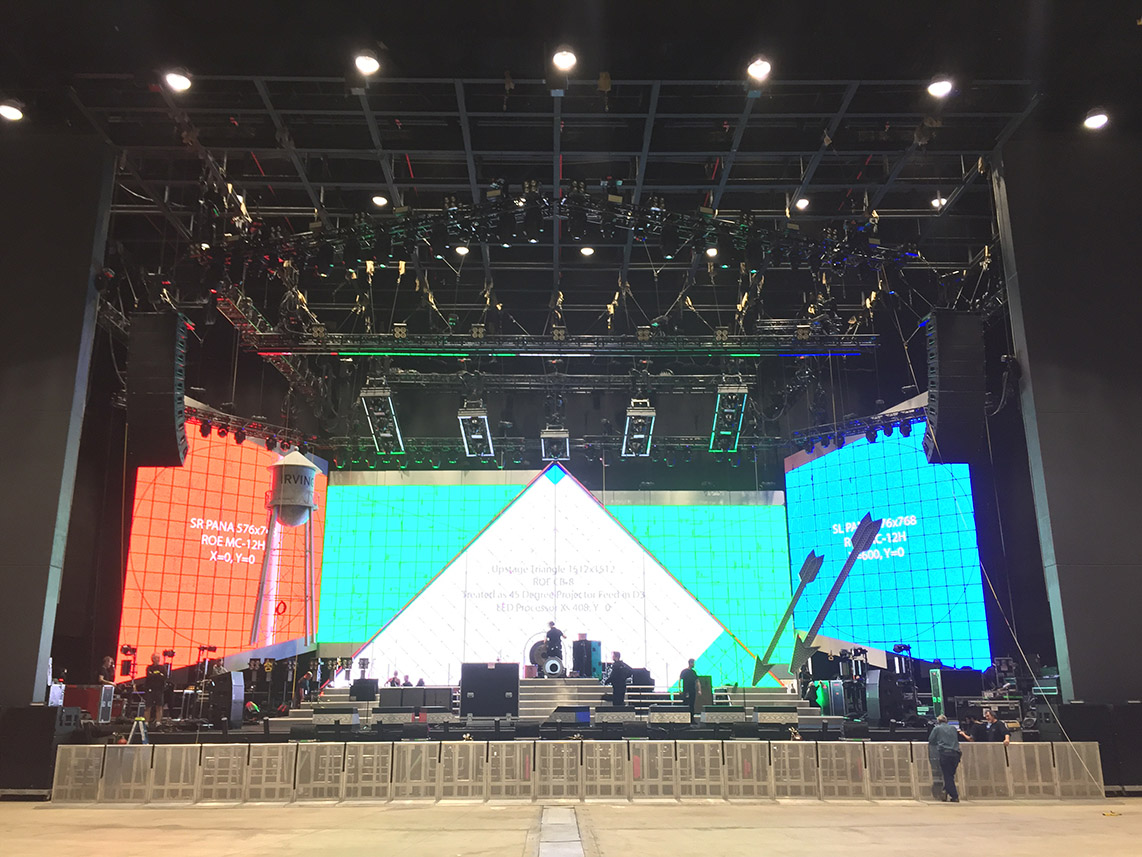 For the US / Canada run which concluded on the 6th February, 12 BroadWeigh cells monitored a 10,000lb upstage video pyramid which was lined with 24(x) GLP X4 bar lights. This was lifted by seven inverted one ton motors under a spine truss being held by five two ton motors above.

Michael continued: “One of the key concerns and reasons for implementing the load cells into the rig was to address the concern about safe and proper weight distribution across the spine truss and its five motors above. Triangles or pyramids are always tricky situations for rigging, having such a large portion of the weight of the element suspended in the middle.”

“This is the first time I’ve used BroadWeigh cells and they’ve been superb in ensuring our motors are taking even weight while the pyramid is constructed. The system really helps me to keep control of how much weight is taken per motor. I love the wireless ability versus running long lengths of XLR for load cell communication.”

Michael always recommends the BroadWeigh kit as the ultimate rigging tool for touring shows due to its numerous benefits. The cells travelled with the pre rigged truss right from pre-production with no need to remove at the end of the night for transport. Bungees were used to ensure the cells couldn’t bounce around and get damaged during shipment. While onsite, all the techs had to do is hook the shackle directly onto the motor hook without any additional steps involved. At the start of a typical morning on tour, Michael would open up the BroadWeigh toolkit to wake the cells and ensure zeros are in place and cells are responding correctly. Once the truss was hung, the video department would use the LOG100 display to monitor loads and load distributions on all 12 motors over the course of their wall build.

“This is extremely important to have, especially if needing to adjust levelling of the wall while being built or if motors with more weight were running slightly slower than those with less weight,” explained Michael.

He continued: “This is also the first show we have used the new BW-BSd USB dongle which is extremely impressive. We haven’t had the need to be too mobile with our workstation, but it would certainly allow some flexibility on a tablet, with the same profile as an average USB drive.” 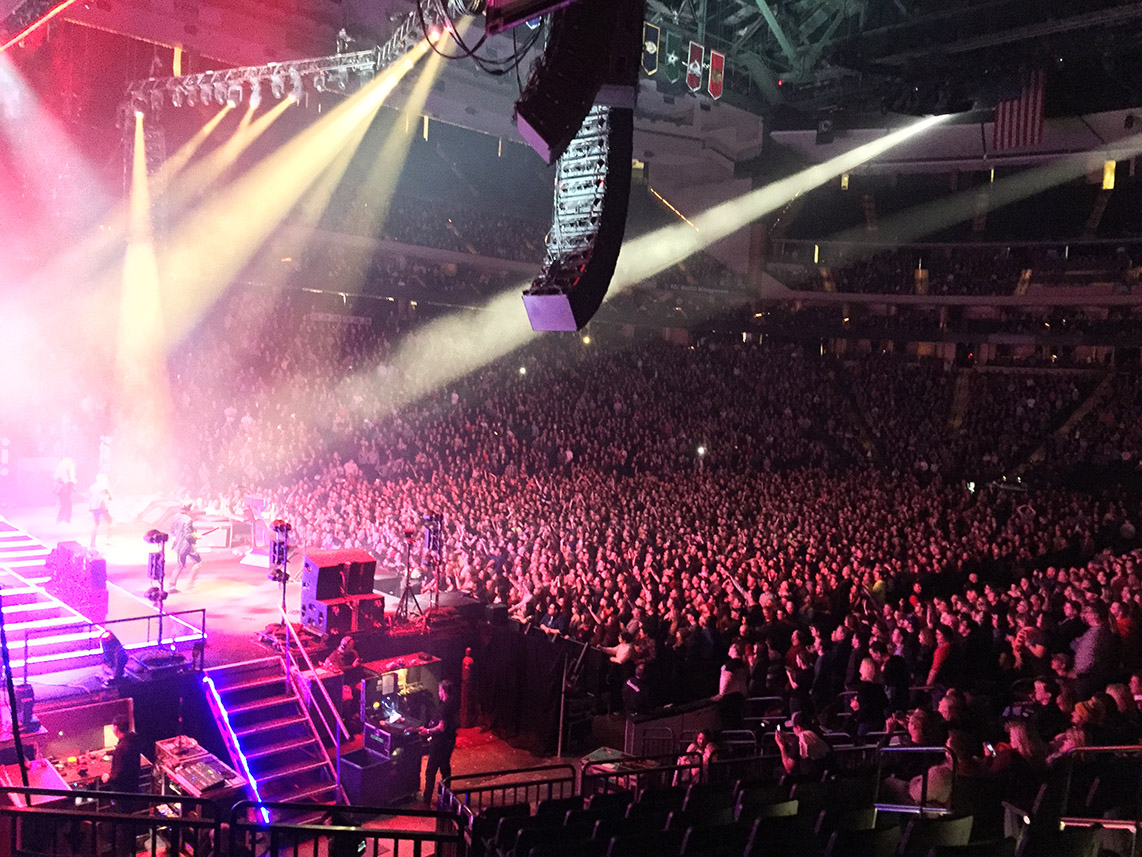 LOG100 is configured with each channel’s continuous loads – spine total, pyramid wall total as well as percentage distributions of each channel. The latest LOG100 update allows Michael to have onscreen buttons to sleep and wake the cells on the visualisation page.

“The LOG100 visualisation tool ensures the weight loads are extremely easy to read and there is no question of what display is for which cell, which can often happen on wired systems with many displays. Battery life stands out over wireless competitors with default battery life at 6 months based on a ten hour day. We feel the overall system cost really is the best on the market with cell for cell pricing more attractive than the closest wireless or even wired competitor,” he said.

Dustin concluded: “To me, this seems to be an efficient touring method for load cells and its Graphical User Interface (GUI) is not difficult to understand. I will most definitely be looking to use this system in future endeavours. It makes my load concerns go away.”