Broadweigh was the wireless load monitoring system of choice for California based Cassidyrig at a recent Miley Cyrus gig at the Lucas Oil Stadium in Indianapolis. The performer was the musical guest at the NCAA’s FINAL Four basketball tournament on April 3rd. In a ‘Tribute to Frontline Heroes’ , Cyrus performed for an audience of first responders during the Capital One Tournament central show airing on CBS between the first and second national semi-final games.

“We were delighted to be approached by Warner Broadcasting to handle the rigging for this fairly elaborate project. This half time concert is one of the highlights of a season called March Madness so it’s a pretty big deal. As most people know, Miley Cyrus is anything but a conservative performer, so we realised that we’d be working on something fairly large scale and of course she didn’t disappoint. But with just a week to get everything set up, working around basketball games and concert rehearsals and putting in round the clock 24-hour shifts, we certainly had our work cut out.”

The Lucas Oil Stadium is naturally an extremely large and strong building so for Dan and the team, there were no real concerns about overloading or reaching certain elevation. Nevertheless, when dealing with any events like this, using load cells to confirm the weights is par for the course for Cassidyrig.

“We had a couple of large cable bridges for audio and lighting, load cells on the structure, an elaborate set of lighting and 4 x led scenic wall elements…and it’s absolutely vital to monitor that kind of weight.” 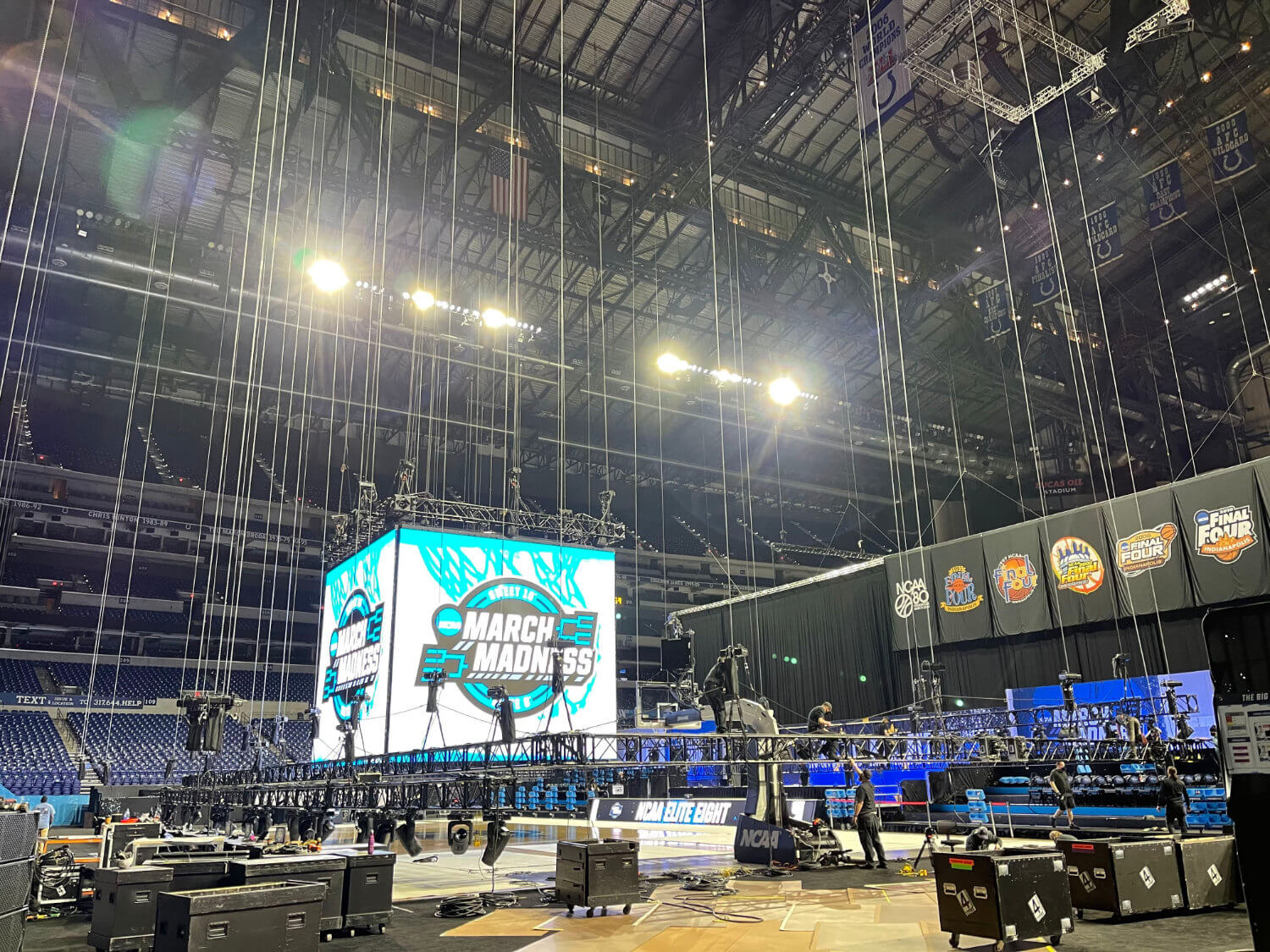 “We keep a good supply of the Broadweigh Twistlinks on both the east and west coast, with the bulk on the west coast. For this project, we used them all – around 64 Twistlinks and a bunch of Broadweigh’s standard load cells. They’re quick and easy to install and get up and running and meant we weren’t fighting for space for installation.”

The LED scenic walls were one aspect of the project that kept evolving on an almost daily basis. “This was a 30,000 – 40,000 lb structure in itself, so every change that was made, in terms of moving it slightly to gain a little elevation, needed to be accounted for. Knowing that it’s been built properly, and that weight is being distributed accordingly is vital. And it’s reassuring to have Broadweigh’s LOG100 software which tells us that the numbers are as expected.

Speed was certainly of the essence for Cassidyrig who had less than a week to get the entire set installed and ready. Dan said:

“We liaised with Miley Cyrus’ creative designers to understand the scenic elements involved and what sort of rigging we’d need. Then we shuttled in riggers from all over the country to prepare it all. There were a few hair-raising moments and a few logistical challenges with regards to getting the trucks with enough time to travel. We were walking on thin ice, with zero room for error. We had fourteen riggers per team – working on everything from rigging in the ceiling to rope management – approximately 30 people working on the higher levels and twenty on the lower. It was a round-the-clock job with our teams working in shifts to come in and adapt the building while dealing with numerous floor obstructions -seating, camera platforms and some other sizeable structures. The team was absolutely amazing – we’re used to big jobs, but this was huge and time was really limited. It was an eye-opener (after being dormant for over a year) that’s for sure.”

“It’s in situations like this that having a product like Broadweigh at your fingertips really proves its worth. We need to be able to prove due diligence and maintain a safe environment, not just for the performers and audiences but for the people who are working on the project too. He added: “It’s hard to express the value of a system like Broadweigh’s to anyone who isn’t in the position of responsibility that we have. But when the safety and wellbeing of thousands of people is in your hands, having a clever tool like Broadweigh at your fingertips isn’t just a cool thing to have…there’s simply no other way to do it. There are so many different scenarios and every time I incorporate Broadweigh, we are still blown away with what happens and how things can change so rapidly without people even knowing. The awareness it gives you in mind-boggling. I’m a huge fan!”