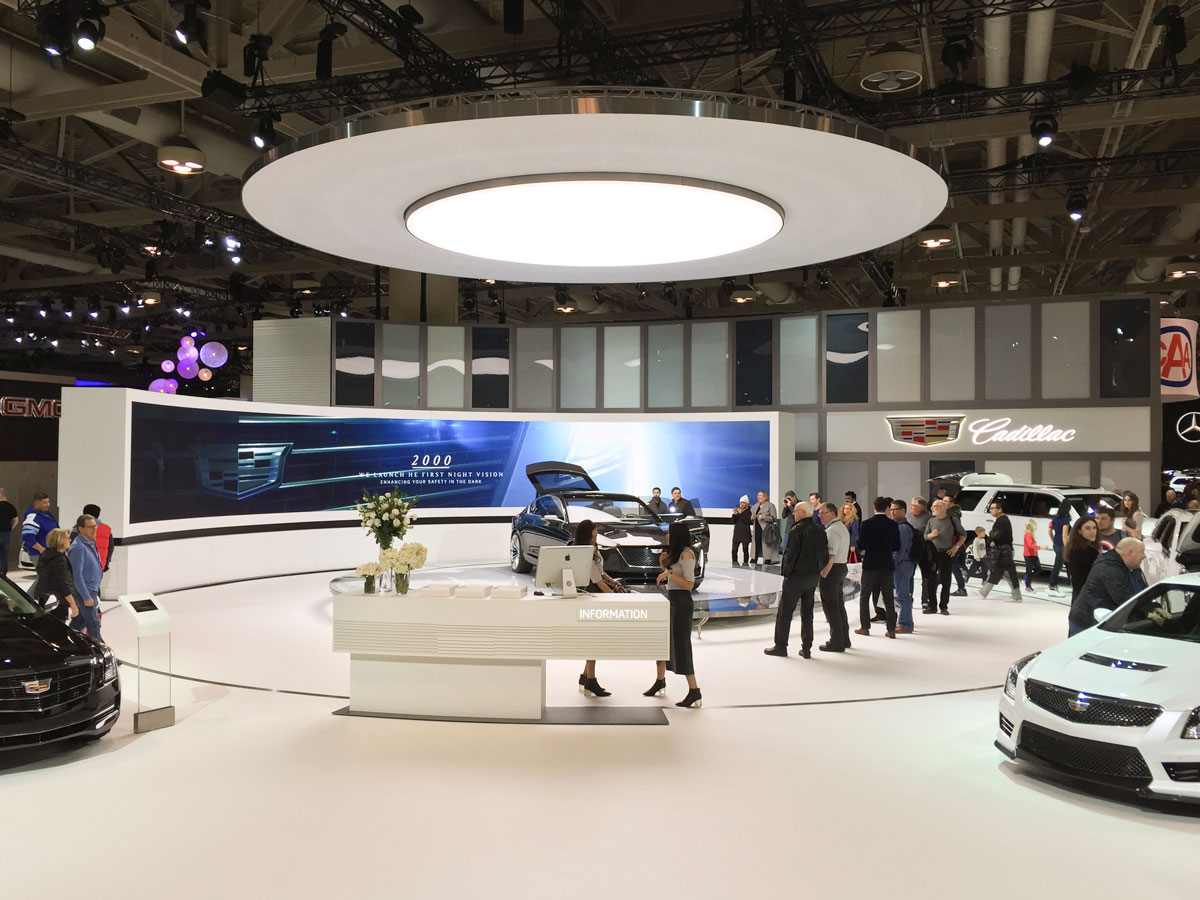 Autoshows are big business in North America. Events like the Montreal Auto Show, the North American International Auto Show and The Canadian International Autoshow in Toronto are big scale events that bring together thousands of cars, trucks and automotive enthusiasts from around the world. As these events continue to grow in size and popularity, competition between the shows’ exhibitors to build the most dazzling displays is fierce, with each stand vying for the attention of the visiting crowds.

“Recently, we’ve supported various customers with their stand displays and we notice that as the stand designs become more complex, there is an ever increasing need to use load cells. Sometimes there are tight weight restrictions imposed by the venue and when multiple point rigged pieces are getting close to this limit, it is often vital to have load cells in place. Other times, the weight distribution of set pieces is critical to their integrity. For example, when you are using multiple motors for certain lifts, it can be impossible to see shifts in loads visibly, which is where load cells offer that hidden insight into exactly how much each motor is taking. It isn’t always the limits of the motors or the buildings you are worried about, but the end product you are lifting. Video walls come into this category as well, where they are quite susceptible to structural build difficulties should there be any deflections in the supporting truss.”

A big challenge that Michael often comes across is changing perceptions about load cells.

“Everywhere I travel and talk with riggers about their past experiences using load cells, they are always telling me how bulky typical load cell systems were, how much trim height they took away and how difficult it was to wire each cell and deal with troubleshooting that kind of system. Working in convention centres with these auto shows, trim heights are limited for vendors so they are looking to maximise every inch possible.”

Wired systems can be extremely cumbersome at events like this. On top of the obvious issue of wiring each cell and having cables run to and from a central hub, there are often time consuming troubleshooting situations where cells might not be responding, because of, for example, cable breaks, tears, cuts or bad connections. Michael believes that the time spent demonstrating the benefits of a wireless system is invaluable.

“Time savings have a huge impact on shows – production managers can’t afford to lose time waiting on the rigging crew to meticulously trace back thousands of feet of cable or to repair breaks or replace cables.”

A big part of Paradigm Rigging’s role is to advise their clients about the importance of knowing precisely the weights of the loads they are rigging. When asked, Michael is always keen to recommend Broadweigh kit.

“Our customers are often surprised by how Broadweigh’s wireless products can change their previous views of the cumbersome wired load cell systems of the past,” said Michael. “We always take the time to go over the system with the riggers and other people using the system. We walk them through Broadweigh’s LOG100 viewing and mapping software and the ToolKit configuration software to make sure they feel comfortable configuring their workspace, and ensure they can get all the extra information they need, such as peak loads, total loads or percentage breakdowns.”

“The Broadweigh kit is often a revelation to my customers – the simple shackle design and compact size means that often there is no loss of trim at all. My clients tell me that the installs are the easiest they’ve ever dealt with, and end-users are always raving about the flexibility of the display system and how easy it is to read and configure system loads.”

For the 2017 Canadian International Autoshow, Michael has been working with Lexus Detroit.

“We’re dealing with close to a 30,000lb custom built flown piece which has been spec’d to be lifted with a mix of 1 ton and ¼ ton motors. Engineer drawings specified that there couldn’t be more than a 4” deflection on the lift, so load cells are essential in watching the load on the whole lift, making sure this custom piece was not damaged at all.”

For another client, Bluewater, Michael has worked to balance a 13500lb load over 8 motors – again load cell monitoring was vital – helping him to see exactly his client’s $5 million video wall was kept safe and not twisted.

Michael has recently used 10 BW-S475 cells to watch the weights of a curved wall unit in the Honda booth at the Montreal Auto Show. Meanwhile Kia MTL used 14 BW-S475 load cells to monitor weights: a video wall had to be built in sections and partially ground supported so that none of the roof trussing would be overloaded in a building where the total beam weight limit was 4000lbs. Again in Montreal, Lexus used 9 BW-S475 load cells to balance the company’s mirrored cube sign which hung above one of its featured vehicles. This custom set piece had mirror panes on the underside to give patrons overhead views of the car below – the Broadweigh cells ensured each motor was taking its fair share of the total weight.

“Time and again we are hearing from our customers that this is the easiest load cell system they have ever worked with and that the battery life is light years ahead of its competitors’. A rigger from Cadillac said he was looking for the rest of the cases and couldn’t believe that all the kit fitted into one case!” concluded Michael.