Manchester group The 1975 played the first gig of their huge UK arena tour at the SSE Arena in Belfast on January 9th. The band went on to play at another 10 of the country’s biggest venues including London’s O2 Arena, over the course of the month. The tour is then set to move onto South America in March, North America from April until June and then into the European Festival season where they’ll headline the main stage at Reading and Leeds festival. The tour will then resume and continue until sometime in 2020, covering Australia before going around the continents for a second time. 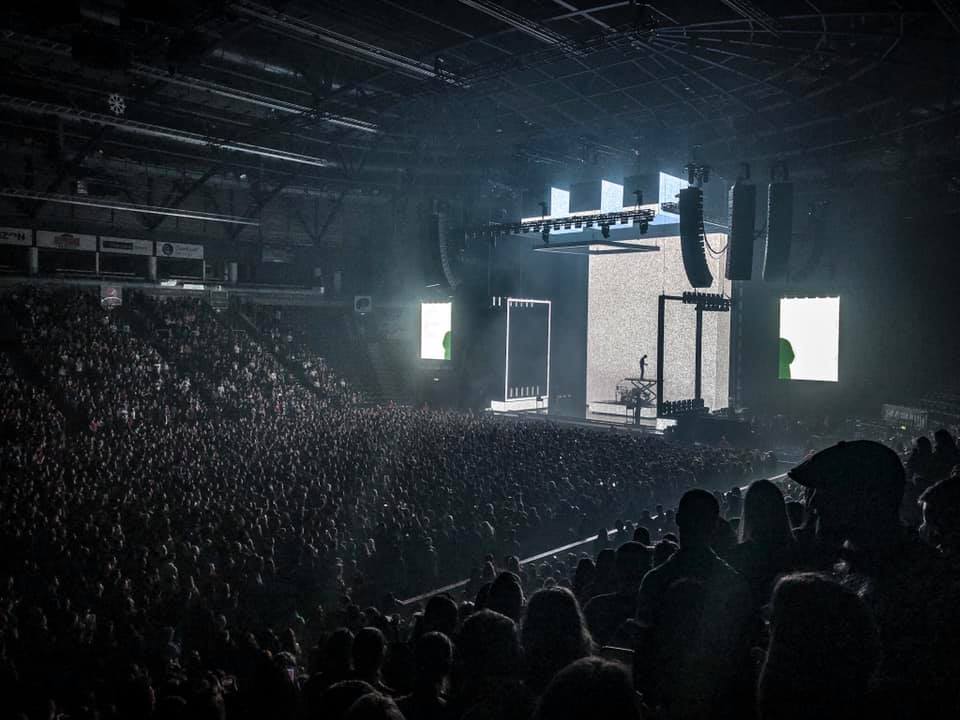 The demanding tour requires 14 articulated lorries to transport the set, two of which are solely for rigging, hoists, automation and the mother grids. Chief rigger for the show, is Simon Lawrence from Rigging Co. Ltd.

“While the show isn’t particularly heavy at forty tonnes, compared to many large productions, it is particularly heavy in a very small, densely populated area in the roof. With the design, we do not have the ability to move things to reduce the loads in the arena, so knowing what is going on is vital. We own our own BroadWeigh kit, so for us it was a real ‘no-brainer’. However, we had to push hard with management to make them understand their roles and responsibilities in the eyes of the law and why, really, load monitoring isn’t just a ‘nice’ to have’ but a necessity,” explained Simon.

Simon is using the BroadWeigh wireless load monitoring system on the tour – in total there are 17 x 4.75 tonne load shackles fitted with BroadWeigh’s new TwistLinks that are used to monitor the weights of the production’s two mother grids. He said:

“We have a down stage automation grid weighing in at just under 9 tonne that lifts on 9 x 2 tonne electric chain hoists. Below this is all the moving video elements of the show, so knowing the individual point loads as well as the dynamic loads is vital as we are moving,”

“We don’t just move in the Z axis up and down, we also have elements that track up and down stage so our point loads are constantly changing. The upstage grid on a further 8 hoists is for the large upstage video wall which measures 10.5m wide by 12m high (another 7t element in its own right). This means we have to be very precise with the line up of the wall to allow us to remove and replace a section of the screen in the centre during the performance. To do this, we have to manipulate the truss – the load cells (which are displayed using LOG100 on a large LED monitor) allow us to ensure we do not overload any one chain hoist. Often, people don’t realise that the slightest movement can transfer huge amounts of weight and could cause a system failure.” 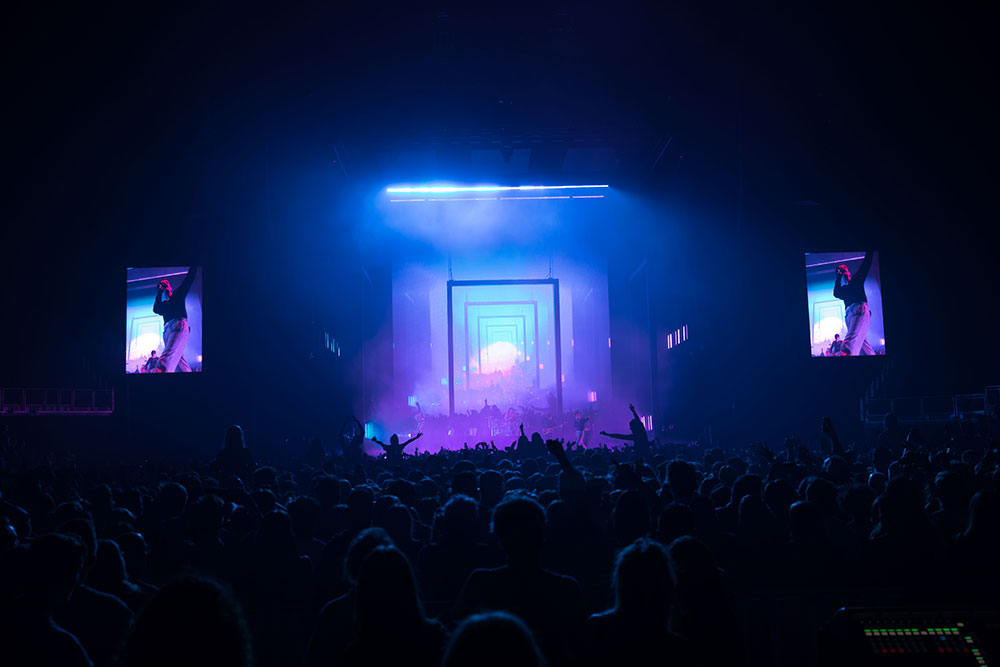 This project is one of the first where the new TwistLink has been put into action,

“We have been eagerly anticipating the release of the Twist Link after seeing the prototype in late 2017,” comments Simon. ” We wanted it particularly for the touring situation where speed and efficiency is key. Being able to pull the load shackle out of its flight case, quickly clip it onto the hoist and be ready to make the connection – what more could you ask for? The pin is rotated so rotational force is reduced and you can also position the aerials, which are inside the transmitters, in the direction of the receivers on the side of stage.. Previously I was adding a second 4.75 tonne shackle pin to pin and this takes time. We may only have 17 cells but if each one took 5-7 minutes, twice a day over 200+ shows, then over the course of the tour that’s a significant amount of time savings to be made”

The second BroadWeigh product in use on the tour is the Wind Speed Sensor. Simon continued:

“When playing outdoor shows, this allows us to write proper wind management plans with real monitoring of wind speeds. Our upstage video wall is a vast surface area for the wind to hit and to have this blow around uncontrolled could be catastrophic to anyone around, whether this is public, crew or even performers themselves. We position the Anemometers – one in the opening to the stage and one out on a PA tower to get average wind speeds across the site. We use hand held displays to allow us to see the sensors when moving around the site as well as BroadWeigh’s LOG100 logging and visualisation software running on the side of the main stage and to get around distance and obstacles we will drop in active repeaters where necessary.” 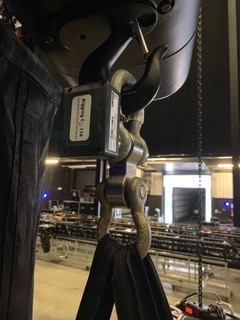 The Rigging Company purchased its own BroadWeigh kit via A.C Entertainment 18 months ago. In that time, they have used the TwistLink load cells and Anemometers on The 1975 tour, used load cells on the last James Arthur Tour in the UK as well as The Chain Smokers European Memories tour in 2018. He added:

“We’ve used them on some corporate projects and even had them on a project for Marks & Spencer – what we were hanging wasn’t heavy but where the structure was attached was a point of concern so we added our BroadWeigh shackles to reduce the element of risk.” 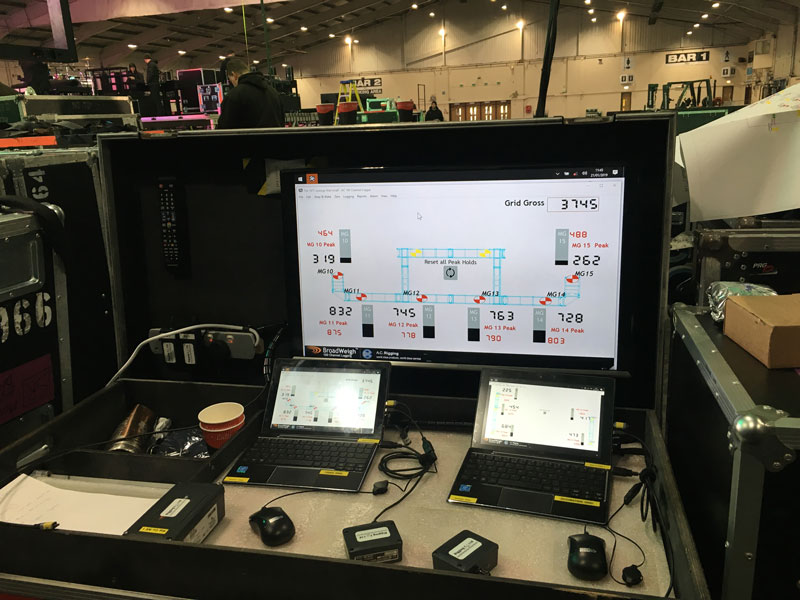 “Load monitoring is something we all should do more of in my eyes. In an ideal world every piece of lifting equipment being used on a tour would have load cell monitoring. In time this will happen, but it will be a long slow road to get there unless a big accident occurs that makes people open their eyes to it. Near misses happen all the time – we lift heavy loads over people’s heads all the time and just because we’ve weighed it once in rehearsals, one small change on the day and we really don’t know exactly what’s going on. Shows are getting bigger and heavier but the roofs of the venues aren’t changing and designers want the look and feel of the show to be constant. By understanding exactly what the roof is structurally capable of, we can then use that information to achieve our goal.”